His work investigated which linguistic properties might contribute to translation difficulty. Specifically, he put his attention to syntactic differences between a source text and its translation, that is to say their (dis)similarities in terms of linguistic structure. To this end new measures were developed that can quantify such differences and this implementation was made publicly available for other researchers to use. The developed metrics include word (group) movement, changes in the linguistic properties of words, and a comparison of the underlying abstract structure of a sentence and a translation. The effect that these specific measures of syntactic similarity have on translation difficulty was analysed by looking at behavioural processing features (process data in the form of eye-tracking and keystroke logging data). In the experiments, it was shown that different syntactic properties indeed have an effect, and that differences in syntax between a source text and its translation affect the cognitive effort required to translate that text. 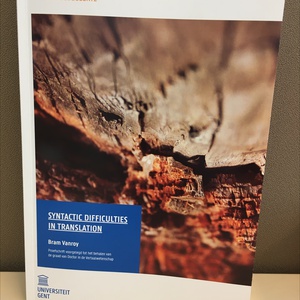